WHAT LED UP TO THE DEPORTATION OF 600,000 HUNGARIAN JEWS?

We will start our unforgettable tour at a large metal map of the former ghetto, located in the Jewish quarter, where I will explain the basics to you. You can expect some history, facts, photos and stories of Holocaust survivors presented in a highly engaging way. 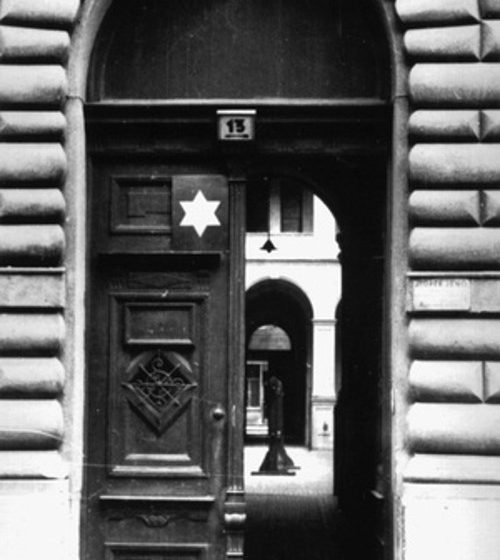 WHY WERE THERE NO MEN TO DEFEND WOMEN AND CHILDREN?

While wandering through this quarter I will show you houses that used to be marked  with yellow stars where around 70,000 Jews were confined from November 1944 to January 1945. This large group consisted primarily of the elderly, the sick, mothers with kids, and pregnant women.Elderly people, ill people, mothers with kids or pregnant ladies.

Jewish men were largely absent, since they were the first ones to be taken to work camps or deported to concentration camps.

These defenceless people were exposed to Nazi soldiers and to the men of the fascist Hungarian Arrow Cross Party.

I will tell you about the terrible conditions they were forced to endure in this very neighborhood.

We will go into greater detail about how this process of Jews living side-by-side in one district happened. It is worth noting that a proportion of the original inhabitants of this quarter were Christians. When the Christians moved out to make way for the establishment of the Jewish ghetto, they were usually given better apartments that had been confiscated from Jews.

WHY DID JEWS LIVE TOGETHER IN THE GHETTO?

It is important to mention that in the case of Budapest, ghetto is actually not quite the right word because Jews generally lived together in the same area through their own choice.

This was because to practice their religion it was more convenient to have the right infrastructure available close by (eg.: slaughter-houses, synagogues, kosher markets, Jewish kindergartens and schools, ritual baths etc).

This preference to stick together later came back to haunt Jews because it made the authorities’ job considerably easier. 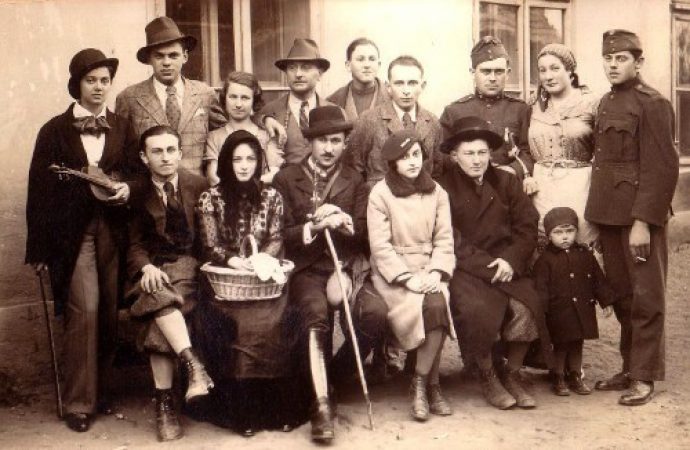 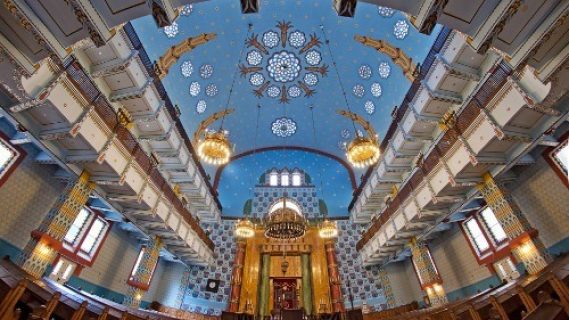 In Hungary there were three different branches of Judaism, with one synagogue to each branch.

We will start by visiting the beautiful Orthodox Synagogue which resembles a typical, traditional place of worship with the Torah-reader table, the  bima in the middle, and dazzling stained glass windows and wall paintings.

The colours in the Orthodox Synagogue are also fascinating, but unfortunately most tourists do not visit this Synagogue, preferring to see only the Great Synagogue. On our tour, however, you will have the chance to see both of these unique synagogues.

The more moderate synagogue (the so called status quo ante) has been closed for a while and its opening date remains uncertain.

THE WORLD’S BIGGEST SYNAGOGUE AT THE TIME

The Great Synagogue is the best known one in Hungary, and was the biggest in the world at the time of its completion in 1859.

We will spend some time  here, as well as in its museum, which stands approximately on the spot where 150 years ago you would have found the childhood house of Theodor Herzl, the founder of modern political Zionism.

I will tell you the dramatic story of the cemetery by the Great Synagogue that was originally built as a garden for meditation, as well as many other curiosities that most tourists will not learn.

When passing by the wintertime Synagogue we will see the moving memorial tree financed by American actor Tony Curtis  in the Raoul Wallenberg Holocaust Memorial Park.

By the way, did you know that Tony Curtis’ father was born in Hungary with the name of Emmanuel Schwartz?

Raoul Wallenberg, the Swedish diplomat, known as the Angel of Budapest, stands out as a shining light in this shameful period.

As mentioned in my video, in another district he established what was known as the international ghetto with protected houses. 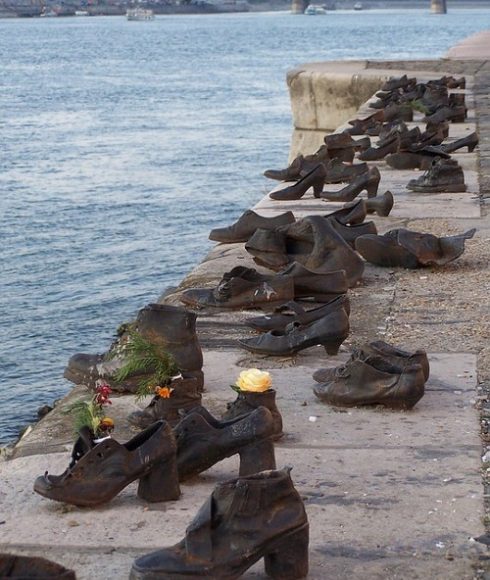 INTERNATIONAL GHETTO and SHOES ON THE DANUBE BANK

After a leisurely midday break delicious lunch, we will head to the above mentioned lesser-known international ghetto where I will reveal facts that are unknown even to most Hungarians.

It never ceases to amaze me how miracles can happen even in the direst of circumstances.  I think that events in this international ghetto are just as important as those in the main ghetto next to the Great Synagogue.

In my opinion the most moving Holocaust Memorial is the Shoes on the Danube bank which can not be left out on our Jewish Heritage tour!

You will see 60 pairs of shoes in bronze representing the thousands of unfortunate Jews who were forced to strip naked before being shot at close range.

Their bodies fell into the water and were carried away by the Danube river. Why are the shoes in this touching memorial? The reason is that before being executed, the Jews had to take off everything, even their shoes.

Close to the Shoes on the Danube bank memorial we will visit the most controversial Holocaust Memorial in Hungary at Liberty Square. You will find out why it has been in the news.

Our next stop will be on the Buda side of the city where I will show you all headquarters of the Gestapo as well as the hotels, villas and houses that the Gestapo occupied.

You will learn about the Gestapo’s brutal actions, consequential decisions, and general cruelty. 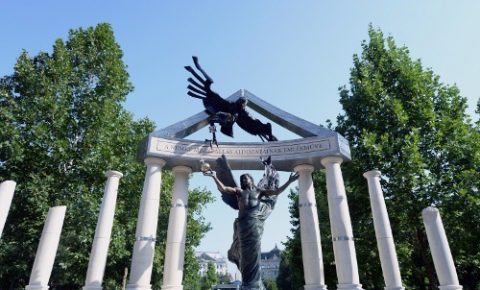 We will talk about the collaboration of many Hungarians without whom the Gestapo could never have deported 600,000 Jews from Hungary in only two months’ time.

Both the full-day and the half-day tours will include many emotional moments and if you are interested in the details of frequently overlooked facts related to the Jewish experience in Budapest, then you will no doubt appreciate taking part in my memorable tour.

DETAILED PRICES STUCTURE- FIND OUT HOW MY PRICES ARE CALCULATED

With all the airport transfers, entrances, luxury vehicles, licensed tour guide included- if you don’t want to miss a thing during your clients’ time in Budapest.

Above 18 people, please email me through the Contact form on my site. Thank you.

You can pay by PayPal (but PayPal incurs a 4-6% transaction fee in addition to the deposit) or by wire transfer. I can only book your dates in my calendar when I have received payment.

The  Jewish heritage tour is one of my most requested tours so please book well in advance for your clients.

Please check my availability and I hope to see your clients soon in Budapest with untold stories that they won’t find in guide books!